The Unicorn Clan is a Great Clan led by its Champion Shinjo Altansarnai.

For 800 years, the Ki-Rin Clan journeyed beyond Rokugan's borders, in search of external threats to the Emerald Empire. In these foreign lands, the clan learned to adapt, to do whatever it took to survive. The clan eventually returned to Rokugan, rechristened as the Unicorn Clan, its members speaking foreign tongues, wielding strange weapons, and drawing upon the kami using sorcery known as meishōdō.

The Unicorn's return was greeted as a barbarian invasion, carving a place in Rokugani society by breaking through the defenses mounted by the Crab and Lion clans. Reintegration has not been without difficulty, but there are lights in the darkness. An ancient treaty with the Crane was honored, providing the Unicorn a strong ally within the Empire. The Phoenix watch Unicorn magic with equal parts interest and concern. The Dragon perceive the wisdom of Shinjo's children, the Scorpion see the advantage in a pliable ally, and all Rokugan marvels at the speed and might of their magnificent steeds. Perhaps they are, finally, where they belong.

The Unicorn are an aggressive, practical, and nomadic clan that has mastered the arts of mobility and warfare. You must use the clan's powerful cavalry characters to outmaneuver your opponent during conflicts, bringing your characters into and out of conflict to keep your opponent on edge. The Unicorn are strongest when they are first to act, and much more comfortable attacking than defending, so be sure to play aggressively and get to your opponent before they get to you.[1] 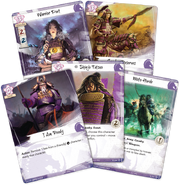 Cards of the Unicorn Clan